Friends, I have a confession to make:  I am not just your average stay at home mama. I am a little famous.  Nobody knows I am famous.  Well, my kids do.  I feel like a million bucks anytime they say “Mom!  You are famous!” This exclamation is usually in response to a stranger knowing me through speaking, my book, NPR radio, the internet or commercials.  Or if they Google me.   (Guys, we should never Google ourselves, and our kids should DEFINITLY not Google us.  YIKES.)  I’ve always been a force and I love an audience of any size.  My husband, John introduces himself in some circles as “Heather’s Husband” since that will inevitably be his initial moniker anyway.

John recently expressed some concern about his historical social standing compared to mine.  I know I married ‘up’  , so I do not understand this.  Maybe it is my father’s mother Portia’s mother (also named Portia) who published a book about her wild life?  The book tells her story from South Carolina to Russia to Sterling, Colorado. It includes the family Huguenot lineage, Portia becoming a Doctor in South Carolina, and her husband Alexis Lubchenco missing a cruise aboard Titanic.  There’s also the tale that Alexander Kerensky helped them escape Moscow when the Russian revolution began.  And he also greeted Big Mama Portia by name in a South Carolina elevator when she greeted him in Russian. Fascinating.

Then there is my Mother’s side of things. During our summer vacation to Colorado, John got a glimpse of the other half of my family history.  This took shape in the form of a gorgeous wood and glass display case in my Uncle Frank’s home.  My Aunt Ruth shared the stories of the items displayed.  She spoke of Senators, the Teller brothers who built the Teller House in Central City, Colorado and the Victorian French Fragrance bottle from Paris that was a gift from someone important.  I remember the intricate bottle living under a plexiglass case on a fancy marble stand sitting in my grandparent’s home.

As I look down the barrel of a milestone birthday, I find my roots utterly fascinating. Family history wasn’t very interesting when I was younger.  I thought I was interesting.  As an only child growing up in some hard situations, I learned to talk to adults instead of my peers.    I wanted to be noticed, to stay up with the adults, to be adored.

I know I was trying to earn my right to be present by being funny, cute and talented.  This led to high school and community plays.  It launched an acting career I guess I’ve never left.  After some extras work in films, local and national commercials (that “Every Woman” Oprah commercial, I’m in that! ) I moved on.  I did dramas for a mega church with 5,000 attending each Sunday. Seeing my face on TV and screen made me feel good.  Great, actually.   I later used my acting skills in sales, training folks to sell and teaching customer service.  My friend Jenny kept me honest as I pursued acting in Chicago. She said, “Just because you act like a movie star, doesn’t mean you are one!"

I would humblebrag more here, but I have something better.  In pursuit of worth and star status,  I literally became royalty.  Last year I learned about Noble Society Services where as a gift you can buy a share of land with a title. I asked my husband if he wanted a Scottish Laird Title for Christmas and he declined.  But. My Dad didn’t need anything for Christmas, and Groupon had a deep discount, so he became the Tsar of Marinovka.  Marinovka is a teeny little forest in Zirgan, Republic of Bashkortostan (Near the Village of Nordovka, which is near Allaguvat a more rural village with only three streets and population of 154 people).  We received GPS coordinates and two beautiful documents; one in English, the other in Russian.  My Father, James Alexis Curlee is now a Tsar.  Which means I am a princess.  Somewhat legit.  I paid an extra five bucks each for my daughters and I to get similar title paperwork for ourselves.   According to Nobility Services, we can officially use our Groupon priced Royalty for our legal documents and getting a good table at a restaurant.  You may kiss the ring, and can we please have a window seat?

My edges have softened with time, and I know I have worth even without an audience. I listen better and talk less, finding other people’s stories more interesting than my own.   While I remain a little famous (and a Russian Princess), my current family keeps me grounded.  I do not have housekeeping staff and the paparazzi attention has fallen off in recent years. In the words of my Peter Mayer theme song, “Nobody knows I’m famous, so I have to go around and say it.” 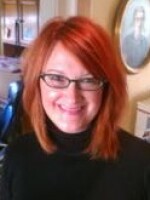 Heather Curlee-Novak
Heather Novak's professional history includes sales and customer service training and troubleshooting for businesses, but she loves motivational speaking best. Heather leads church events for youth, singles and women, has spoken for Chicago Apartment Association and many organizations throughout Indiana. Nowadays Heather is just another stay at home wild mama trying to loose some weight, keep some sanity and enjoy her life. She is being raised by two little girls named Portia and Libby and is indulged by a guy named John who was gracious enough to marry her. Heather blogs about F Words: Feisty Faith, Fumbling Family, Fairly Healthy Food, Failed Fashion and Fabulous Friendships. You can find her at www.liveyourloveoutloud.com.
See stories by Heather Curlee-Novak