Programs To Lure Remote Workers To Indiana Have Arrived – But Do They Work?

Campus tours happen all the time at Purdue University, but one recently was a little different. Instead of fresh-faced high schoolers, they’re actively recruiting adults with jobs that allow them to work remotely.

Here’s what they’re offering: Stipends up to $5,000, plus whatever campus amenities one could imagine as long as they work remotely from the school’s campus in West Lafayette for one year. Christian and Zoe Martin, a married couple from Los Angeles, don’t remember where they heard of this particular program, but they do remember all the flashy ads they saw when they started looking into remote working programs.

Turns out, these programs are very real. Christian and Zoe started applying for all the ones they could find.

“After this we're going down to The Shoals in Alabama," Zoe Martin said. "That's like a different remote program. We're gonna check it out and see what they have to offer and kind of go with an open mind.

And already they’re noticing something: they’re being competed for.

"That feels a little strange, you know, especially when, we’re just like young people who are working," Christian Martin said.

Evan Hock, co-founder of Indianapolis-based MakeMyMove.com helps places start incentive programs, including the one at Purdue. He said people like the Martins who can keep their good-paying jobs and live just about anywhere are a huge untapped weapon in an emerging arms race for communities to attract workers.

Hock expects the benefits will outweigh the costs of these incentives. The theory is these remote workers will pay taxes, buy houses, eat out at restaurants, which generally boost the local economy. And those splashy gimmicks like money and mountain bikes given to a few people is just the bait to start a conversation. For instance, Purdue’s program is only actually paying up to 10 people even though 15 to 20 are expected to move.

Hock points out this idea of competing for jobs isn’t new. For decades, local governments battled each other to offer all sorts of incentives that create jobs. But it was almost always geared towards companies.

"The same theory that says, 'Hey, if Amazon brings that job, that's worth X number of dollars to my community,' applies to the remote workers," Hock said. "We're seeing American life sort of shifting. Suddenly, these workers can choose where they want to live, and they can wield that economic power."

Join the conversation and sign up for the Indiana Two-Way. Text "Indiana" to 73224. Your comments and questions in response to our weekly text help us find the answers you need on statewide issues.

But not everyone is so eager to jump into this bold new future of remote worker incentives.

Timothy Bartik, a senior economist at the Upjohn Institute for Employment Research, is skeptical. He said there’s no proof these programs are actually as effective as proponents claim.

"The first issue is: do they have any effects on migration?" Bartik said. "The second is even assuming they do have some effects. What are the benefits of that, versus the cost?"

Bartik said local governments might find it attractive because handing out money to new residents is easier than other, more politically-intensive strategies, like removing barriers for foreign immigrants or investing in schools. And he warns if it doesn’t have a noticeable effect on the economy, it could alienate people who’ve lived in communities for years, who never got an incentive to live there.

“It’s obviously good for the people who migrate,” he said. “Why is it good for the local population? Why should local residents pay higher taxes to pay for these things?”

Important to note, Purdue's program isn't funded from tax dollars, but some other incentive programs do use public funds or offer land owned by towns.

Evan Hock with MakeMyMove.com said they plan to collect data and gather as much evidence as possible on these programs. But, In the meantime, Hoosiers can expect to see more of these programs in Indiana. French Lick, Jasper and Bloomington are in the process of launching their own incentive programs. 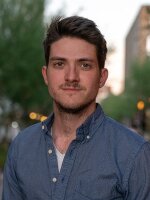 Justin Hicks
Justin Hicks has joined the reporting team for Indiana Public Broadcasting News (IPB News) through funding made available by (IPBS) Indiana Public Broadcasting Stations. Justin will be based out of WVPE in his new role as a Workforce Development Reporter for IPB News. Justin comes to Indiana by way of New York. He has a Master's Degree from the Arthur L. Carter Journalism Institute at New York University. He previously earned a Bachelor of Music Degree from Appalachian State University where he played trumpet. He first learned about Elkhart, Indiana, because of the stamp on his brass instrument indicating where it was produced.
See stories by Justin Hicks