Assessing bike safety in Michigan after a deadly year

Tomorrow marks the anniversary of the crash in Kalamazoo County that left five bicyclists dead and four others seriously injured. The riders were all members of the Chain Gang, a group that organizes weekly rides in and around Kalamazoo.

They were out on a rural road in Cooper Township – about 20 minutes into a ride – when pickup truck crashed into the group.

Sheila Jeske is one of the survivors. She recently described her injuries.

“Both hips were dislocated, broken. Both ankles broken, bad compound [fracture] on the left. My knee ... I had ACL, PCL, lateral, collateral, posterior lateral, so everything in my knee creamed. Collapsed lung. Broken ribs. Staples in my head. Sutures in my other knee. Broken teeth.”

This is Part One of "Sharing the Road," a Michigan Radio series. Click here to see the complete series.

The driver of the pickup truck, Charles Pickett, Jr., is awaiting trial on charges including operating while intoxicated causing death and second-degree murder.

Tomorrow, the Chain Gang will host “Finish the Ride,” the latest cycling event to honor the victims.

According to Michigan State Police statistics, that crash was one of nearly 2000 involving motor vehicles and bikes last year. Thirty-eight bicyclists died on Michigan roadways in 2016. That’s a 10-year high. Part of that is because people are just driving and biking more.

With that in mind, Michigan Radio decided to examine bicycling and bike safety in our state. We asked for your thoughts on how to keep the roads safer and got a lot of them. Here’s a sampling of what cyclists had to say.

One of my biggest concerns being on the road is distracted driving.

Approach right-hand turns on red with caution. [Drivers] don’t look before they turn to see if there’s a pedestrian or a bike around.

Fix the potholes so drivers aren’t distracted, aren’t trying to swerve out of the way to miss potholes.

Passing safety laws that give us more room on the road. I have kids and I want to be able to ride bikes and go home and be a mom to them.

Here are some of the responses we got from drivers.

Cyclists, wear bright colored clothing and [do] not ride at night without lights.

Why don’t you expand the sidewalks for one section for people for rollerblading, bicycles, instead of putting them in the streets? It is the stupidest thing ever to put [people] in the streets.

Cyclists who sort of insist on going in the middle of the road, they have every right to do that, but it certainly makes it harder. If they do stay more towards the side, it makes it a little easier to get around them safely.

Bicyclists who break the law, as in they don’t use the bike lanes. They don’t do the hand signals for turning. They cross at red lights.

Eli Cooper spends a lot of time thinking about those kinds of concerns. Cooper is the transportation program manager for the City of Ann Arbor. He says most of them can be addressed by what he calls "the five E’s."

"Those give E's include engineering, which would be making physical improvements; education; encouragement; enforcement; and evaluation," Cooper said.

Through evaluation and engineering, Ann Arbor has established nearly 100 miles of dedicated bike lanes over the past decade or so. But Cooper says creating lanes isn’t enough.

“We’ve installed over 600 signs that indicate ‘bicycle lane’ and ‘share the road.’ The ‘share the road’ is critically important. I remember getting complaints a lot about bicyclists that were put upon by motorists driving too close and saying some unkind things and they drove by. The learning curve is long, the population is wide.”

Bicycling groups would also like a wide berth. In 2015, Grand Rapids enacted Michigan’s first ordinance requiring five feet of space when cars pass cyclists. Tom Tilma is the former director of the Greater Grand Rapids Bicycle Coalition. His company ActivCity works with communities and colleges trying to become more pedestrian and bicycle friendly. He says the passing ordinance is tough to enforce, but it’s already made a noticeable difference in Grand Rapids.

“In some ways it’s an educational tool. You could even say in some ways that it’s symbolic, but as the word gets out, it does start to have an effect," he said. "I’ve definitely noticed drivers in the Grand Rapids area giving me a much wider berth than they used to.”

Several other communities now have five-foot safe-passing ordinances, too, including Kalamazoo, Portage, and Ann Arbor. Battle Creek passed a three-foot requirement this year. Tilma sees that as progress.

"Conditions for cycling in Michigan are much better than they were five or six years ago. There’s no doubt about that. However, overall, Michigan would be more in the middle of the pack among the states," Tilma said.

In its latest annual report, the League of American Bicyclists ranks Michigan 18th among the 50 states for bicycle friendliness. Michigan gets low marks for infrastructure, funding, legislation and enforcement. For example, there’s no statewide passing law, and  in the state that built the auto industry, change has come slowly for some of the many cities designed for cars without much thought given to bikes. However, Michigan gets higher scores for programs, education, and encouragement. What’s encouragement? Detroit’s brand-new bike sharing program is an example. More than 400 bikes are now available for rent in 10 neighborhoods. 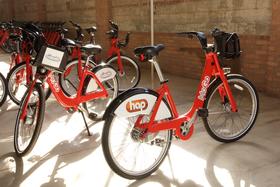 “We will be able to offer accessible options for seniors and people with disabilities, so including things like tricycles, tandem bikes, and hand cycles so we’ll really be able to reach a range of people and abilities,” Nuszkowski said to a group of bike enthusiasts.

Detroit’s streets were built when more people lived and worked there. That has helped the city carve out nearly 200 hundred miles of bike lanes in recent years, including some cutting-edge protected lanes between curbs and parked cars.

The National Highway Traffic Safety Administration recently set aside money to help Michigan keep its cyclists safe. That’s the good news. The bad news is states only qualify for that money when 15% or more of their traffic deaths are pedestrians or bicyclists.

Ann Arbor Transportation Program Manager Eli Cooper says that kind of statistic is a reminder that the most important lesson about sharing the road is a basic one.

“It really is about understanding to take turns, to share, to be a good citizen. Yes, folks in today’s fast-paced world are pressed for time. It’s just human nature, some folks want what they want, they want it now, and they can’t always have it.”