Court of Appeals: Colleges may ban guns on campus 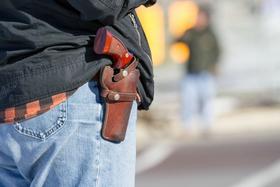 Colleges are allowed to ban guns on their campuses.

That was the decision of the Michigan Court of Appeals Wednesday. Of the three judges on the panel, one dissented. The Court said colleges can ban guns on their campuses without violating the Second Amendment.

The University of Michigan only allows military and law enforcement to carry weapons on campus. Gun rights advocate Joshua Wade sued the university when it refused to give him a waiver.

Steve Dulan is Wade’s attorney. He said the decision violates prior case law, and creates unreasonable expectations for people who want to carry their guns.

“Any of us who have been to Ann Arbor know that it’s kind of hard to tell whether you’re on campus or not in Ann Arbor,” he said. “We’re supposed to have this comprehensive uniform scheme across the state and this is a chip in that system.”

The University of Michigan and advocates for gun regulations argue schools are safe spaces. They say schools, including colleges should be allowed to regulate guns on their campuses.

“It’s important that these places of learning, higher institutions, schools in general, in order to ensure the safety of everyone that’s learning there and studying there, that they are able to have the ability to say what’s safe and what’s not safe on their campus,” he said.

Dulan says they will likely appeal the Court’s decision.