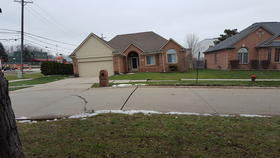 The state House and Senate are playing volleyball with money to fix a sinkhole in Macomb County.

A House bill originally gave the city a three million dollar grant. It also approved millions of dollars for Flint.

Senate Majority Leader Arlan Meekhof (R-West Olive) said they did this in part to encourage other communities to maintain their infrastructure – instead of waiting for a crisis to get a handout from the state.

"I’m not interested in opening up the checkbook for the state and having everybody stand in line and get free money for their infrastructure,” he said.

But Thursday the House amended the bill once again. They changed the appropriation back to a grant, though due to a rule technicality, they had to add one hundred dollars to the original three million.

Republican Representative Jeff Yaroch (R-Richmond) sponsored the bill for his district. He said the grant is a reasonable request.

“There’s small communities of 5,500 that are getting half a million dollars,” he said. “I have half a million people who have asked for $3 million. It’s not going to fix the infrastructure in this case, it’s for bypass pumping, to protect the Great Lakes.”

A spokesperson for the House Republicans explained that the money needs to be as a grant because a loan would mess up a bond the county is in the process of getting.

The bill goes back to the Senate, but the Legislature is out for the next two weeks, and it remains to be seen if the new changes will be accepted. However, the money – including funding for Flint – won’t be allocated in the meantime.

Flint-area Representative Phil Phelps (D-Flushing) said he doesn’t mind the delay. But he said if the House and Senate can’t come to an agreement, he wants Flint’s money put into a separate bill.

“I’m not too worried about it,” he said. “I am concerned for Macomb County though. I would really like to see them be able to utilize a grant to help them in aid.”