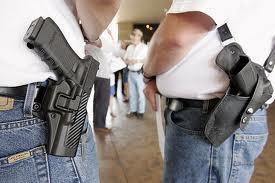 The state House passed controversial gun legislation today to get rid of the permit necessary to carry a concealed weapon.

“All these bills really do is eliminate a five-year felony from those people who are already carrying their firearm lawfully and put on a coat," said Dean Greenblatt, an attorney for Michigan Open Carry.

But opponents, like state Rep. Jewell Jones, D-Inkster, say opening up gun laws is dangerous. Jones said it is especially harmful to people of color, and people should have the right to live without fear of gun violence. He said on the House floor:

“As a young black man who has to read articles in the newspaper and have to see clips on social media and hear interviews on the radio about senseless gun deaths that happen in neighborhoods like mine and yours, near and far across our state, my question is: Why does one right take priority over another?”

While the bills mainly passed on party lines, some Republicans did cross over and vote against the bills.