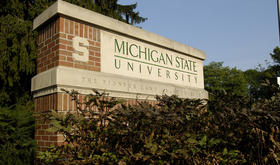 Michigan State University is asking a court to decide whether it has to release police and arrest records related to a highly publicized investigation. The records are related to the criminal investigation into an alleged sexual assault that may involve members of the Spartan football team.

The sports network ESPN filed a request for the records under the Michigan Freedom of Information Act. But the Ingham County Prosecutor’s office says releasing the records could interfere with the criminal investigation.

“Since the cases that were discussed are open Investigations and charging decisions have not been made, we believe the release of this information would Infringe on the defendant's right to a fair trial, interfere with ongoing police investigations and constitute an unwarranted invasion of privacy…”

MSU spokesman Jason Cody said that places the university in a bind.

“We are in a situation where we have competing interests,” he said. “We, obviously, as a public institution must abide by the FOIA law, and we do abide by the FOIA law. However, we also have the chief law enforcement officer of our county requesting that we do not release these records.”

The lawsuit names ESPN as the defendant and asks the Michigan Court of Claims to settle the question.

ESPN would not comment until it had been served with the lawsuit.

In 2015, ESPN sued MSU to release un-redacted police investigation records as part of an investigation into how campuses handle sexual assault investigations and whether athletes receive preferential treatment. MSU lost the case and was forced to turn over the records.