Superfund sites in Michigan wait and see after conflicting plans from EPA, President 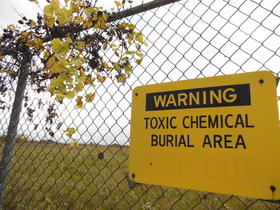 But the EPA's new head, Scott Pruitt, has told employees that he's going to make Superfund cleanups a priority.

Activists fighting for the cleanup of a Superfund site along the Pine River in St. Louis, Michigan hope Pruitt will get some more money so he can keep the promise.  It's one of the most polluted Superfund sites in the state.

Jane Keon is with the Pine River Superfund Citizen Task Force. "I hope it translates into more money," says Keon. "We are desperate for money from Washington, D.C."

Keon says she's choosing to see Pruitt's statements on the importance of the Superfund program in a positive light.

"Our Michigan congresspeople in Washington D.C. have assured us they are not going to agree to that (cutting funding)," says Keon. "In fact, they're going to push for more money in the Superfund part of EPA."

Toxic chemicals are leaking from a closed chemical factory near the Pine River.

You can read more about what's going on (or rather, what's not going on) in St. Louis here.

Keon says a contractor could start on a cleanup immediately, but so far, no one has approved the money to clean it up.

There are 64 other Superfund sites in Michigan.