Michiana Chronicles: The beginning of an old age

My mom’s mom, Anne Brown, never left Centre County, Pennsylvania. Gram got pregnant at 19 and married the father and eventually had six children with him through years of physical and sexual abuse and poverty. That’s how it was for rural poor girls in the 1930s and ‘40s. A young woman’s life was hers to bear but not so much to own. There were so many claims – the mouths, babies, fists and late-night drunken body to which to yield.

Gram got a break when an elderly neighbor gifted her kids an old farmhouse. It was an act of mercy and the beginning of a somewhat different, less terrifying life but still one of flat horizons. They used an outhouse and burned coal. It was a 19th Century home and they lived in that way through the ‘50s while gram earned a pittance prepping salads and baking pies in a local steakhouse. They survived on government welfare and food stamps. But there was no help from the local churchgoers for a woman who’d made the bed gram made or for the kids who lay in it. Tut tut.

Mom escaped to college and then to Chicago, where she married the wrong guy and had two kids of her own and where, by the 1980s, she was able to make different decisions about the trajectory of her life. She refused to carry the weight of her husband forever and that meant divorce but also very likely meant abortion – a subject my dad raised once in fury and that mom never acknowledged to us. But it was there, like Kay Adams in The Godfather, and it was never actually any of my business, or my layabout dad’s, or anyone else’s.

Last winter the parochial high schools bussed students downtown for a rally outside the federal courthouse in South Bend. It was a festive and noisy pro-life event anticipating the pending Dobbs decision and the kids waved and cheered at passing cars like volleyball players at a parking lot carwash. Boys and girls together: Honk to end abortion!

This was early afternoon on a school day and I noticed a priest in a collar and pom beanie looking on with satisfaction. I asked about the rally and was it for class credit. “Oh yes,” he said. “This is our Christian Witness.”

Months later, on the same site, a different group gathered to celebrate the actual Dobbs decision in a lower key. Elected officials spoke humbly through a bullhorn. Heads were bowed. A prayer was circled. Solemnity was solemnized, triumph trumphalized. The beginning of an old age.

I returned to work past the statue of MLK and Father Ted, an idealized moment from a time almost 60 years ago when our moral arc seemed poised to bend more justly.

When they cast Amy Barrett in bronze whose hand will she grasp?

I was standing with friends along the Mississippi in Memphis one hungover morning when a young evangelist approached. It was a strange exchange – two atheists, one Jew and a soul-saver who wouldn’t take no-thanks for an answer – that moved quickly from the Good News to the Bad, right to the fire and brimstone. Hell awaits but it’s never too late to repent. Up to the very end.

There was talk of Hitler, of evil, of Satan on earth. He took us to the Twin Towers on 9/11 and into the cockpit with Muhammad Atta. This was a terrible thing but even Atta, at the yoke, headed for a different eternity, could be saved and Heaven-bound if only he accepted the Lord as his savior in the nanoseconds before impact. Until that moment, precisely.

My friend said, “You know, Jeff Dahmer was born-again.”

The evangelist said, “That’s what I mean!”

Of course none of this was for our consumption. It was a rite of public worship for one, old boy steeling his faith in a hair-shirt outing, jousting with the damned. I guess he got what he wanted.

Mom died unexpectedly in 2015, before Trump but after many tests of her personal resilience and ebullience. I am always sorry she is gone but am glad she retained a lot of post-war hope until the end. Another fading fume.

She was not ever religious but did adhere to an old chestnut peddled by Robert Schuller on his Hour of Power broadcasts: Tough times never last but tough people do.

I don’t know any more, mom.

But isn’t it pretty to think so? 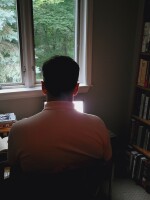