Election Tuesday, November 8th, was my first time working the polls. I had been interested in the past, but didn’t want to take off work to have yet another 14-hour day, as my job involved plenty of long days already. Now that I am retired, I have gotten more politically active and have time to be more civic-minded.

So, I looked at the in.gov poll worker training videos and thought it was something I could do. In June, I signed up to be a poll worker on the 4th floor of the City/County building. Running elections requires poll workers from each of the two major parties; I signed up as a Democrat.

And then I heard…nothing. I wondered if my application hadn’t gotten to the right place, and checked again at the City-County building. I was reassured that I was, in fact, on the list of volunteers. And still, I heard nothing. I talked with a neighbor who has been politically active for years; she reassured me all was well and that training did not occur until the end of October.

Toward the end of October, I finally was notified that I would work the North Liberty Vote Center, and was given dates for further training specifically for St. Joseph County. This training was overwhelming! There were 3 connected voting machines to learn, and complicated instructions regarding provisional ballots, and lots of rules to learn about who could do what. As if that isn’t enough, there also was training on identifying agitated people who might be upset enough to try to disrupt voting.

Now I was filled with apprehension! I studied the training videos more than once, worried that I might not be able to withstand a 14-hour day, and lost a little sleep some nights. I was also realizing that after being so careful during the pandemic, I was about to be exposed to hundreds of people who might be doing THEIR civic duty while contagious.

Election Day arrived. It was a beautiful clear, cold night when I arrived at 5 am at the North Liberty Vote Center. Being one of 3 Democrats out of the 14 of us, I was quickly promoted to be one of the two Poll Clerks who would certify ballots. We took the oath of office administered by the Election Inspector, and got our orientation to the Vote Center and our first cups of coffee.

I was so relieved to find that the training had been excellent and I felt comfortable. There also was a lunar eclipse that morning, and several of us went outdoors to appreciate the “blood moon” and speculate whether it was a good sign or a bad omen. Then at 6 am, the Election Inspector loudly called out “Hear ye! Hear ye! The polls are now open!” to the people already lining up. This is Indiana law, rather quaint but charming.

We were busy, and it was steady throughout the day. My workers were a congenial group. In this era of hyper partisanship, we poll workers collaborated wonderfully to keep each other hydrated and cared for through the day. How refreshing! Everyone was treated with respect, from the disabled voter needing help to sit and stand, to the teens nervous but excited to vote for the first time. The atmosphere was calm and welcoming. We saw 1,109 voters and NO agitated people, thankfully! At 6 pm, the Election Inspector called out, “Hear ye! Hear ye! The polls are now closed!” When all the voters were done, the Inspector printed out the tallies to take to the Election Board and to post on the Vote Center window. We took down the equipment, unplugged extension cords, and joked together about how quickly the day had gone and how happy we were that so many had voted at our little rural Vote Center.

Would I do it again? I think I would! It was a meaningful experience of helping to ensure that people’s voices were heard. No vote, no voice! Poll working is one way we can work together to put our country’s true values into action. And THAT is work we can — and should—do. 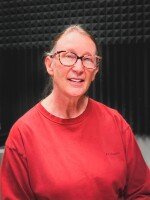