Is there a better day to think about slowing down? Ooooof. I hope you are moored in a comfy chair beside an extra serving of pie, or feeling the cozy drag of additional stuffing in your … fluff. As we head into hibernation I’ve been learning about resistance to motion, otherwise known as “friction.” There’s a science to this study, called “tribology.” We often think of friction as a bad thing. In relationships, for example, friction means conflict. But tribologists urge us to “reframe friction,” to consider situations in which friction can be a good thing.

Now, before your mind races toward the bedsheets, let me offer a family friendly example: Toothpaste and toothbrush bristles are scientifically calibrated for just the right abrasion — friction — to allow for user error so we can brush away plaque without, we hope, wearing away our gums.

Friction also describes a wide variety of user experiences that benefit from slowing down and being made to pay attention. In my case, I have spent the last two months relearning how to drive a car with manual transmission, and am amazed by the way the slow-down-and-pay-attention friction of the stick shift has refocused my experience on the road.

I learned to drive with manual transmission in the 1980s, in a tank of a Toyota Land Cruiser that my family called Big Red. My saintly patient father taught my sister and me the delicate two-step of the clutch and the gas pedal, tuning our ear to the engine so we’d know when to shift gears. We lived in Colorado, so Dad made sure we could keep the car balanced on steep hills at a stop light and shift from neutral to first without sliding back down into the car behind us. Driving the Land Cruiser took all my attention. The friction of working the machinery made me conscious that I was hurtling through space in gas-powered metal, and that I ought to take care.

A few months ago, I inherited my mom’s beloved Mini Cooper, a 2003 metallic gold jewel of a car that my parents kept in a garage under a soft blanket to keep out floating atoms of, well, anything. I was humbled to see how far my stick shift skills had atrophied after decades of driving automatics. This time around, it was my patient spouse who rode shotgun while I got the hang of the old familiar motions, tuning my ears to a new pitch in a zippy motor car that Lee Burdorf (my Mini Cooper mentor) calls a souped up go-kart. I’m almost to the point where I can nudge the car up or down a gear based on the engine’s purrs. But, the friction of effortful driving reminds me how the lubrication of automatics can tempt drivers into multitasking sloppiness. On a recent long trip, we were shifting drivers, and my spouse buckled in and started to unwrap a complicated deli sandwich to munch during his stint behind the wheel. As he started the engine, I watched, amused, as his face dialed through expressions from hungry anticipation to dismay, once he realized eating a messy sandwich is not possible while driving a manual. Friction won.

Software designers also think about friction and lubrication as they craft our online experiences. They slow us down, or speed us up, to keep us hooked and scrolling on their platforms — sometimes with democracy-shaping impact, as we’ve seen in recent elections, when the Big Lie can be so slickly viralized. In his recent article in The Atlantic, Jonathan Haidt points to the year 2009 as a crucial social media shift toward balkanization that plagues our political landscape, since that’s when Facebook “developed algorithms to bring each user the content most likely to generate a ‘like’ … eventually including the ‘share’ as well. Later research showed that posts that trigger emotions––especially anger at out-groups––are the most likely to be shared.” How little effort those clicks take — by design — leading to a tsunami of political division.

Maybe the meltdown of Twitter is the reminder we need that meaningful engagement with one another requires deliberation. As we power down for winter, we might embrace the opportunity to be slow with one another, considering our complexity, our friction, with curiosity, rather than derision. And an extra helping of pie can’t hurt. 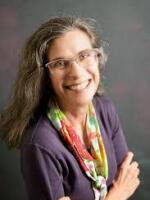 April Lidinsky
April Lidinsky is a writer, activist, mother, foodie, black-belt, organic gardener, and optimist. She is a Professor of Women's and Gender Studies at IU South Bend and is a reproductive justice advocate.
See stories by April Lidinsky